What forces must be pondered when designing metal pallet racks? How do we verify that the structure will be suitable to withstand all loads? These and other issues are those which should be taken into account in the design of this type of rack, with the goal of ensuring its stability and resistance, and therefore the overall security of the installations. 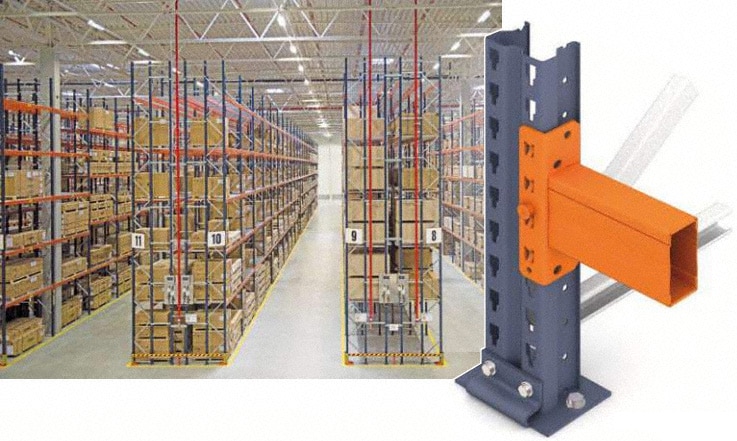 It has become the main benchmark on this matter, and provides additional technical information required for the implementation of the Eurocodes. In addition, designers must also provide for the EN 15620, EN 15629 and EN 15635 standards as guides for the specifications of the storage system, the required tolerances during assembly and the safe operation of the installation.

Likewise, conventional racks for palletised loads are metal structures, generally formed by components made out of thin, cold-formed, steel sheet metal. They are able to withstand heavy loads, while the installation is designed to be as lightweight as possible; consequently the rack’s own weight rarely exceeds 5% of the load stored in the facility’s interior.

On the other hand, it is imperative that this type of installations for palletised loads be versatile, to be able to adapt to different load types. For this reason, the connections between the main parts of the structure must be adjustable, and quick and easy to assemble.

The uprights of these structures usually have perforations along the entire profile, while the beams include connectors provided with hooks that fit into the perforations of these uprights.

The calculation is carried out in two stages:

For general analysis, it is usual to consider two, two-dimensional (2D) structures in concurrent vertical and perpendicular layouts with respect to the storage aisles. In the model calculation, the following requirements are observed:

It includes two types of analysis:

Type of analysis according to the classification of the structure

This classification is based on the relationship of the expected load design in regards to the critical load of the structure. According to the coefficient obtained by this relationship, the need to perform a second order calculation will be determined.

In the verification of the different elements that make up the structure the following concepts, among others, must be taken into account:

There are different types of actions that may affect the strength and stability of the racks, so that it is also imperative to contemplate them when setting up an installation of this kind. The actions on the racking are classified into several groups:

Load states and the combination of actions

It is viewed as appropriate and sufficient to study the two load states listed below, considering the following actions or load cases:

In each of the load cases the buckling of the structure’s parts subject to the corresponding unweighted actions (nominal loads) is studied:

In each of the load cases the tensional state of components subjected to the corresponding weighted actions (affected by factors of security) is studied. In the verification formulas of the elements the combination of forces (down-aisle + cross aisle) must be considered. It is also necessary to ponder the uncertainty as to the different actions that can affect the racking (described previously).

To do this, there are established security coefficients considered, for both the load coefficient and the material, and which can range between 1.0 and 1.5. Some countries have specific national legislation which obliges you to use greater weighting coefficients in the facilities that are built on its territory (A deviations). 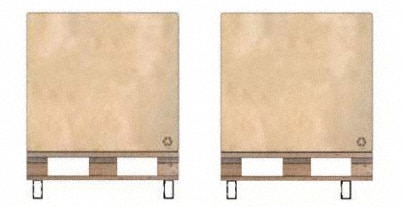 When the design and/or handling of the storage system allows the pallets to systematically become off-centred, the increased load that causes this off-centring on beams and braces must also be taken into account in the design of the structure.

Likewise, the eccentricities of the lines of the structural system must be observed, in the event that they are deemed excessive.

Eccentricities in the positioning of the pallets

Eccentricities of the diagonals of the vertical bracing

Although the diagonals of the vertical bracing are not physically connected to the racks on the junctions that form the neutral lines of the uprights and the beams, in the 2D calculations the diagonals can be viewed as attached to these junctions, provided that the eccentricities of the same are kept below certain values depending on the width of the brace and the edge of the beams.

The same happens with the diagonals of the frames.

Conclusion: the safety of the installation and responsibilities

Lastly, we want to point out that in a large part of the incidents that occur in palletised installations, human error interferes and are primarily caused by scraping or impacts of forklifts against the racking.

On the other hand, these impacts may represent higher than normal actions on the racks, than those established in the EN15512 norm. Thus, not only is it imperative for the manufacturer to carry out a good structural analysis and design of the installation, but it is also makes good use of the same, so that actions against the racking does not exceed those considered in the installation’s structural calculation.

This is all the fruit of many years of experience, and studies and trials by FEM (Federation of European Maintenance) and other agencies. It is essential to keep in mind:

Individual responsibilities of the different system suppliers that make up the storage equipment.

Software for the structural calculation of racks

Currently, all the mentioned analysis throughout this article are done via computerised calculation programmes. Mecalux has applied their extensive experience in design, manufacture and installation of warehouse systems to the development of a powerful design software, capable of finding the best option for each warehouse layout, the dimensions of the storage structures and the most ideal profiles. In this way, optimization of capacity and cost of the warehouse is procured, with the utmost safety.